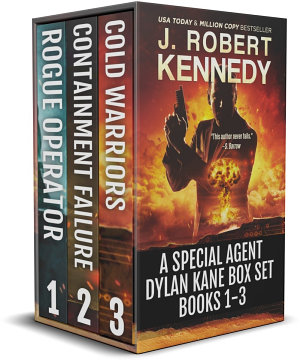 “Dylan Kane leaves James Bond in his dust!” The first three thrillers in the Special Agent Dylan Kane series from award winning USA Today and million copy bestselling author J. Robert Kennedy. If you enjoy Bond, Bourne, and Hunt, then you’ll love Dylan Kane. ROGUE OPERATOR IN ORDER TO SAVE THE COUNTRY HE LOVES, DYLAN KANE MUST FIRST BETRAY IT. Dylan Kane is in a race across the globe to stop a conspiracy reaching the highest levels of political and corporate America, that if not stopped, could lead to war with an enemy armed with a weapon far worse than anything in the American arsenal, with the potential to not only destroy the world, but consume it. CONTAINMENT FAILURE THE BLACK DEATH KILLED ALMOST HALF OF EUROPE’S POPULATION. THIS TIME IT WILL BE BILLIONS. New Orleans has been quarantined, an unknown virus sweeping the city, killing one hundred percent of those infected. The CDC, desperate to find a cure, is approached by BioDyne Pharma who reveal a former employee has turned a cutting-edge medical treatment into a weapon, and released it. The stakes have never been higher as Kane battles to save not only his friends and the country he loves, but all of mankind. COLD WARRIORS THE COUNTRY'S BEST HOPE IN DEFEATING A FORGOTTEN SOVIET WEAPON LIES WITH DYLAN KANE AND THE COLD WARRIORS WHO ORIGINALLY DISCOVERED IT. Dylan Kane stumbles upon a meeting between a known Chechen drug lord and a retired general once responsible for the entire Soviet nuclear arsenal. Money is exchanged for a data stick and the resulting transmission begins a race across the globe to discover just what was sold, the only clue a reference to a top-secret Soviet weapon called Crimson Rush. WHAT READERS ARE SAYING ABOUT THE DYLAN KANE SERIES ★★★★★ “The action sequences are particularly well-written and exciting, without being overblown.” ★★★★★ “I love how the author explains what’s needed but doesn’t just ramble on in narrative.” ★★★★★ “The events in this adventure are so real and so heart pounding you can’t put it down. Mr. Kennedy is by far my favorite writer.” ★★★★★ “Don’t mess with Kane, he takes no prisoners, especially when you target his friends.” ★★★★★ “This is one of the best stories I have ever read. The action and plot is believable and exciting and of course the climax is nail biting stuff. This author sure knows his stuff - if not, he does a great job of convincing his reader that he does!” ★★★★★ “Fast paced international spy thriller with good old American values among its main characters. I’d like to think we really do have agents like Kane.”

The Templar Detective and the Sergeant's Secret