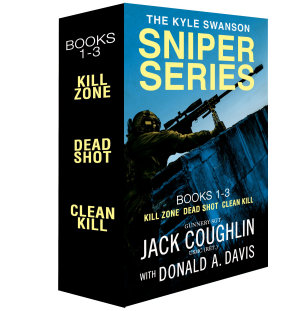 Jack Coughlin, the Marine Corps' top-ranked sniper and author of New York Times bestseller Shooter, follows Gunnery Sgt. Kyle Swanson's action-packed top secret missions in the Middle East in the Kyle Swanson Sniper Series, Books 1-3. In Kill Zone, Kyle Swanson receives orders to mount a top secret mission to rescue an American general captured in the Middle East by terrorists who threaten to behead him. In Dead Shot, Swanson faces his most deadly enemy yet, a legendary enemy sniper working with a fringe Islamic organization that has created a terrifying new weapon of mass destruction. In Clean Kill, an attempt at a new peace in the Middle East is shattered by an unknown attacker, and only Swanson can find out who's responsible.

Authors: Jack Coughlin
Categories: History
From the author of the New York Times bestselling memoir Shooter, comes a riveting narrative of how snipers have changed the course of America's war on al Qaida