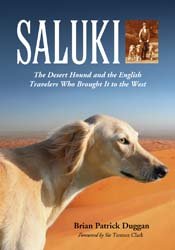 One of the oldest known breeds of domesticated dogs, the Saluki traveled throughout the Middle East with desert tribes, who valued the dogs for their ability to hunt gazelles. Famously painted on the walls of the Pharaohs’ tombs, the Salukis’ history intrigued English dog enthusiasts who were instrumental in popularizing the breed and importing it to Europe and the United States in the early 20th century. This book tells the story of those who brought the Saluki to the West, most notably Florence Amherst, who discovered the dogs while in Egypt and went on to breed 50 litters. Other world travelers who fell under the Salukis’ spell included Lady Anne Blunt, Austen Layard and Gertrude Bell. Also covered are lesser-known Saluki aficionados, mainly military officers who hunted with their hounds in Iraq, Syria, Palestine, and Egypt and sought to replicate that experience at home.